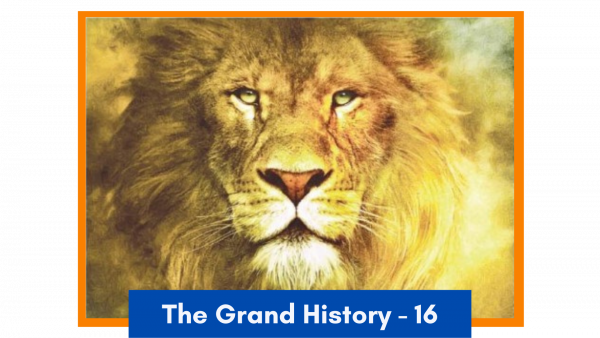 Agasti Muni began his reign over the Tamilham region of South Bhārat as the uncrowned Emperor, who ruled the minds of the people and the kings alike. However, his empire was of love, selfless service, sacred purity and upliftment.   The script of Tamil language prevalent at that time, basically originated from the Brahmi script. It was called ‘Kolelattu’. The word ‘Kola’ in Tamil means ‘stick’. The script got this name because the lines in this script were straight like a stick. This script is found to be used in all ancient inscriptions. It is believed that it was Agasti Muni who created this script only for inscriptions and for engraving sacred mantras and prayers on the walls and roofs of temples, since it was difficult to engrave round letters on stones. The second script of Tamil was also promoted by Agasti Muni and was propagated by the Pandya and Chola kings. This second script, having round-shaped characters, is called ‘Vatteluttu’ - ‘Vattel’ means circular. This script can be called the sister of the Modi script. Agasti Muni used this script of round characters for writing books on tarpaulins, because the tarpaulin is torn when a straight line is drawn on it with the tip of a peacock-feather. The present day Tamil script is a mixture of the two.

Agasti Muni considered five major elements of Tamil literature. 1) Iyal (poetry) 2) Dnyānam (philosophical texts) 3) Ishai (devotional music) 4) Nātakam (play or drama) 5) Ettutoghai (story collection). Agasti Muni himself wrote compositions of each of these five and later about 250 texts were composed by Agasti Muni’s leading disciples, viz. Nakkirar and Tolkappiyar. Even today, the Tamil language is rich in literature. Had the Tamil language literature not been preserved in the temples, we would not have been able to know about a major part of the history of ancient Bhāratiya culture today.

In Tamilaham, Agasti Muni established many Gurukulas and nominating Tolkappiar as their principal teacher, he himself visited Kuttalam, a scenic spot in the Tirunervalli region. At this spot, the Chittar River descends in the form of a waterfall from a height of 340 feet, and that too, in three stages. At this place, Agasti Muni started austerities with his twelve principal southern disciples. Agasti Muni lived here for a total of three years and imparted all his knowledge to these twelve disciples and made them take a vow to keep traveling all over the country (north and south) for the rest of their life. The journey of these twelve disciples all over India brought about the integration and fusion of different traditions. A total of 108 ashrams of these twelve disciples were established all over Bhārat. The heads of these ashrams were in constant touch with each other and, thus, a great network was formed all over India. Even today, the most famous places of Agasti Muni are Agastyavaram and Podiyamalai in Tirunervalli district. It was in Podiyamalai that Agasti Muni established the first university in the south of Bharat. Even today, Tyamil devotees gather in the Agasti temple here every year and celebrate ‘Agasti Mahotsav’.

After establishing the principal ashram at Podiyamalai, he resumed his journey and established ashrams and schools at Brahmagiri in Coorg, Drāksharamām in Andhra Pradesh, Badami (Vatapi) in Karnataka and Agastyampalli in Thanjavur. Even today, in all these places, there are huge temples and ashrams of Agasti Muni.

In the course of his wanderings, Agasti Muni reached Vedanthangal and in the midst of the beautiful nature started praying to the Parameshwar. Many devotional songs started flowing from his mouth. These songs have been recorded by Agasti Muni’s disciple Nakkirar and it is called ‘Tirumurugāruppadai’. The collection contains hymns of Shree Murugan, also known as Kartikeya. As the legend goes, while singing these devotional songs, as the voice of Agasti Muni started resonating in the atmosphere, birds with melodious sounds from different parts of the world started coming to this place. Even today, after the holy month of Shravan every year, hundreds of species of birds migrate and settle in today’s Vedanthangal. They come in such large numbers that even the leaves on the trees cannot be seen.

Even today, Tamil-speaking Bhāratiyas revere Agasti Muni as the highly revered fatherly figure (Pitamah) of Tamil literature and a Maharishi with extraordinary powers and is worshiped in villages all around. Later, great sages such as Shankaracharya, Ramanujacharya, Madhvacharya in spite of being born in south Bhārat, were able to deeply influence the people of north Bhārat, by undertaking many a beautiful mission.

This clearly indicates only one thing; that in Bhārat, there has been a constant harmonious flow of love, sacred purity and culture of the highest order from the north to the south and from the south to the north, and Agasti is the original source of this flow.